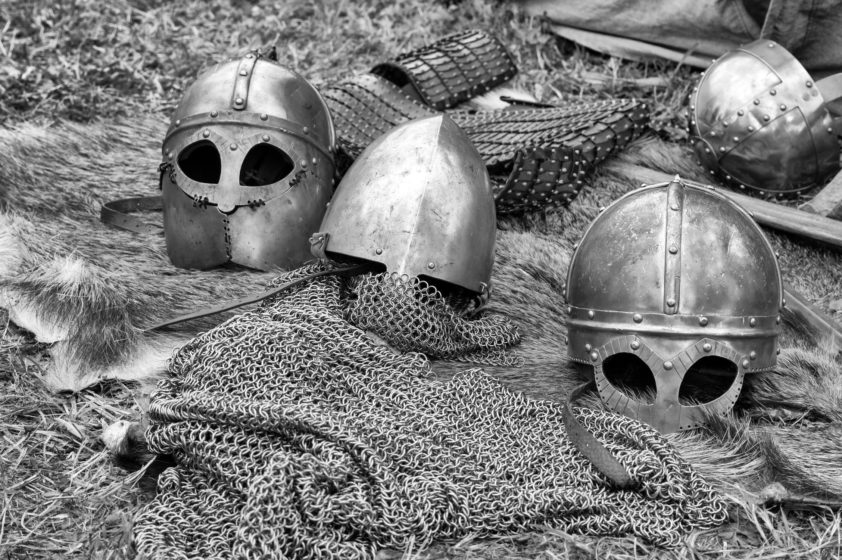 Romans 13:11 “and that, knowing the time, that now it is high time to awake out of sleep: for now is our salvation nearer than when we believed.

12 the night is far spent, the day is at hand: let us, therefore, cast off the works of darkness, and let us put on the armour of light.

13 let us walk honestly, as in the day; not in rioting and drunkenness, not in chambering and wantonness, not in strife and envying.”

Let us learn the meaning of the figure of speech that the Apostle Paul is using in his letter to the Romans when he told them to “awake out of sleep,” “Put on the armor of light,” and, “let us walk honestly.” (Romans 13:11, 12, 13)

Paul was familiar with the customs of the Roman soldiers. He had spent many days and nights chained to some of these soldiers. Through his conversations with them, he had learned their habits and customs.

The Roman soldier appears to have been permitted to lay aside his armor when night came, and spend the night as he wanted to. But in the morning he was required to take up, and don his armor again, and to appear at the dawning of the day to his post of duty.

Frequently the soldier after laying aside his armor would spend the night in riotous carousing and drunken reveling, often far into the early morning hours. Then sometime before the day he would fall asleep and sleep very heavily after his sensual excesses.

As the day began to dawn he would awaken, or be aroused, hurriedly clean all the filth that might have accumulated on his armor during the previous day, hastily put it on, and hurry to the barracks to receive his rations and be assigned his duties for the day.

Knowing these customs Paul adapts his language to these facts, and we want to share them with you.

Romans13:11-14 And that, knowing the time, that now it is high time to awake out of sleep: for now is our salvation nearer than when we believed.

12. The night is far spent, the day is at hand: let us, therefore, cast off the works of darkness, and let us put on the armour of light.

13. Let us walk honestly, as in the day; not in rioting and drunkenness, not in chambering and wantonness, not in strife and envying. {honestly: or, decently}

14. But put ye on the Lord Jesus Christ, and make not provision for the flesh, to fulfill the lusts thereof. (KJV)

WE WANT TO OBSERVE TWO THINGS IN THIS READING:

1. First, Paul gives a command, a duty is put before us.

The command or duty is,

D. “Make not provisions for the flesh.”

2. Second, he gives a reason for the performance of that duty.

The reason is simply this.

B. “Our salvation is nearer than when we first believed.”

We would like to look first at the duty of awakening.

The second we will look at the duty of clothing ourselves with the full armor of God.

Disciples are supposed to have passed the time of their carousing, fleshly indulgences, riots and reveling (sins of commission). But many times people give up the open sins of the evil living and then fall into lethargy, and apathy, and indifference, carelessness, sluggishness, slothfulness (sins of omission).

In the Church, we don’t have many, if any, drunkards, extortionists, adulterers, blasphemers, revelers, or idolaters. Christians don’t commit such awful ungodly acts. Not so many will break the Ten Commandments.

But many of those who have put off the works of darkness are yet asleep to all responsibility, activity, and duty.

Sleep is a period of unconsciousness. Physical and mental powers are sluggish. It is a period of sloth, of idleness, of inactivity. We are unclothed and defenseless. Our enemies have us at their advantage.

Judges 4:21. Then Jael, Heber’s wife, took a nail of the tent, and took a hammer in her hand, and went softly unto him, and smote the nail into his temples, and fastened it into the ground: for he was fast asleep and weary. So he died. (KJV)

DURING SLEEP TIME IS PASSING AND WE ARE UNAWARE OF IT.

“The sun is rising.”

There are yet many who need to hear the gospel.

Many of our people are engaged in the activities of the Church. Prayer, Sunday School work, ladies auxiliaries, youth activities, Bible quizzing, prison ministries, Bible studies, and other ministries.

But much more are nothing more than sanctified sponges, soaking up all that is given but never distributing to others. You owe a debt to a lost world which we can never, in one lifetime, repay.

A Roman soldier’s life was given over completely to the service of the business of the Emperor. He never had any say in where or when he would fight. He was totally under the command of his commanding officer. It was his responsibility to keep his armor in shining and excellent condition so that he would be ready at a moments notice to do his duty.

It is God’s business, and, we are God’s soldiers.

What Paul is saying is that we need to be clothed with the Lord Jesus Christ.

John8:12. Then spake Jesus again unto them, saying, I am the light of the world: he that followeth me shall not walk in darkness, but shall have the light of life. (KJV)

The Roman soldier cleaned and polished his armor every day so that it would shine and reflect the sunlight. He represented the World Power and might of Rome.

The British Royal Navy’s ropes carry a scarlet thread typifying that it is the property of England. And as the Roman soldier bore the image of Rome on every part of his armor, so every part of the Christian armor reminds us of Christ.

“The breastplate of righteousness,”

“The helmet of salvation,”

“The sword of the spirit,”

“Feet shod with the preparation of the gospel of peace.”

Paul gives us the reason for all this preparation,

We are very near the coming of the Lord…

“For now is our salvation nearer than when we believed.” (Romans 13:11b)

Malachi4:2a. But unto you, that fear My name shall the sun of righteousness arise with healing in his wings; (KJV)

Remember the words of the Lord Jesus when He was only twelve years old.

We also must be about our Father’s business. The day has far spent the coming of the Lord Jesus could happen at any moment.