Standing Near The Cross 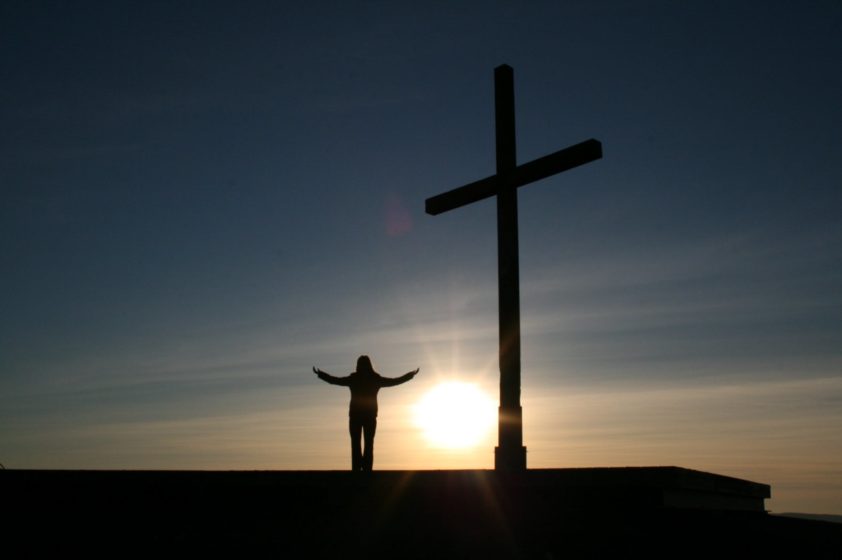 Standing Near The Cross

25. “Now there stood by the cross of Jesus his mother, and his mother’s sister, Mary the wife of Cleophas, and Mary Magdalene.”

26. “When Jesus, therefore, saw his mother, and the disciple standing by, whom he loved,..”

In today’s reading, there were some people who stood near the cross.

1. Four Roman soldiers – they were there out of duty.
2. Four women and the apostle John – they were there because they loved Jesus:
3. Mary, the mother of Jesus
4. Salome (His mother’s sister)
5. Mary Magdalene
6.John, the beloved disciple

Most commentators are divided as to the identity of Mary, the wife of Cleopas. Any attempt to identify her with any exactitude is mere conjecture. For this reason, I have left her out of my sermon outline. I like the possibility of her being identified with Mary the mother of James the less and Jose ( Mark 15:40) but again there is no proof.

A Place
of Redemption:

Luke 8:2. tells us that Mary Magdalene was a woman whom Jesus had cast out seven demons. She had been in bondage to Satan for a long time. These seven demons made her do terrible things. Satan was at work in her life to destroy, cause havoc, wreck her physically, emotionally and spiritually. Mary was in a hopeless and helpless situation.

When we talk about the deliverance that Jesus can be provided for Mary Magdalene I often think of a verse in Acts 26:18, which reads, “To open their eyes and turn them from darkness to light, and from the power of Satan to the power of God, so that they may receive forgiveness of sins…”

This is what Jesus did for Mary Magdalene. He redeemed her and brought her out of her miserable condition.

(a) For me to move out of darkness into light, Jesus had to move from the light of heaven into a darkened world.

(b) For me to be delivered from the power of Satan to the power of God, Jesus Christ had to be forsaken by God.

(c) For me to be delivered from guilt to forgiveness, Jesus had to be made sin for us.

(d) For Jesus to make me rich with blessings, He had to become the poorest of poor.

Yes, redemption is a costly thing.

A Place of Rebuke:

Who was Salome? Most commentators identify “his mother’s sister” as Salome, the wife of Zebedee and the mother of James and John (Matthew 20:20-23). As the mother of James and John, she was the one who once asked Jesus a very selfish request, “Can my two sons have places of honor in glory?” In other words, she wanted something for her two sons. She wanted one of them to sit at the right hand of Jesus’ throne and the other to sit on the left hand of Jesus’ throne. What she asked of Jesus was a very selfish request. She wanted the best for her two sons.

Jesus responded ( Matthew 20:20-24) by saying that she didn’t know what she was asking.
“Can they drink the cup that I going to drink?” (referring to his death). Salome’s request was born out of pride and selfishness.

Did her two sons deserve thrones? Thrones are not given away, you have to earn them. Salome had forgotten the true cost of reward. She did not realize that suffering comes before reward. There is no crown without across. There is no wearing of a crown without the drinking of the cup of suffering. Even the Lord Jesus Christ himself did not return to the throne of heaven except by way of the cross.

Sometimes we can be so selfish in our desires. Salome’s request for her two sons was a selfish, earthly, proud request. She did not realize the price that her two sons would have to pay. Remember James, he was martyred and John was exiled before they went home to glory. Salome was greatly rebuked standing at the cross, realizing what it cost Jesus, the Son of God, to give up. Jesus gave up the glory of heaven and became a servant for us by giving his life for us.

A Place
of Reward:

Mary was Jesus’ earthly mother and He did not ignore her on the cross because he rewarded her by sharing His beloved disciple with her, “Dear woman, here is your son”.

Why did Jesus reward his mother? We have just concluded above that rewards come at a high cost. What was the cost for Mary? What suffering did she endure?

Luke 2:35. reveals a prophecy concerning Mary, “A sword shall pierce your own soul also” How did she suffer? She suffered physically when she brought the Saviour into the world. She suffered shame and reproach and gossip when found to be with child before the marriage was consummated with Joseph.

She fled to Egypt to save her child, but countless innocent children died because of her child. How do you think she felt about that? She would have suffered emotionally. There was a growing separation between her and Jesus when Jesus declared to her one day, “Don’t you know that I must be about my fathers business?”

Yes, a sword shall pierce your side. She felt the climax of Simeon’s prophecy at the cross when her son died, and she suffered because of

1. the way he died (on a cross, numbered with the transgressors) and

2. where he died (openly, publicly, shamefully). And Mary stood there feeling the pain of the sword go through her soul.

But Jesus saw her and had compassion for her and assured her of His love for her. What was He doing? He was establishing a new relationship with her.

“I am going back to heaven. Because of this you and I must have a whole new relationship. But in order to give you peace in your heart, in order to heal up your broken heart where the wound has pierced so deeply, I’m giving you John.”

Jesus felt her sorrow, he knew her loneliness, and He rewarded her by giving to her the disciple whom He loved so dearly. Jesus didn’t have any possessions to give to anybody. The soldiers had gambled for His clothes. What could He give Mary? He gave John to Mary. And from that very hour, John took her into his own house.”

For Mary, to stand at the cross was to stand at a place of reward. Ultimately, God rewards those who suffer or have suffered for his sake. Jesus knows our trials and our needs. The Scriptures teach us that, “If we suffer, we shall also reign with Him.” Jesus was ultimately rewarded, but it came by way of the cross.

A Place
of Responsibility:

For John, to be on the cross was to stand at a place of responsibility. What we need to first understand is that John stood at the cross restored. He, along with the other disciples, had forsaken Jesus and fled for their lives at the garden of Gethsemane. But, John came back to the cross. He was restored and forgiven.

Christians may stray and deny our Lord, but we can still come back to the cross. It doesn’t matter what we’ve done. The cross is the place to go for forgiveness, deliverance, and restoration.

For John to stand at the cross was probably not the safest place to stand or the easiest place to stand. It would have taken courage and love for John to come back to the cross. But remember what John wrote years later in 1 John 1:9 “If we confess our sins, he is faithful and just to forgive us our sins and to cleanse us from all unrighteousness”.

All believers are taking His place here on earth. John 20:21 tells us that,“As my Father has sent me, even so, send I you.” You and I represent Jesus to others. To acknowledge the cross is to acknowledge a place of responsibility. If you and I have come to the cross, we have a huge responsibility to love the Lord Jesus (because he has loved us on the cross), to love others (just like John loved Jesus’ mother), and to love others the same way Jesus loved us. A cross is indeed a place of responsibility.

“Near the Cross” – that is where the Lord wants us to be.

1.  A place of redemption – if you have never trusted the Lord Jesus, the cross is the place to start.

2.  A place of rebuke – all of our pride and selfishness just fades away as we stand at the cross and see the Lord Jesus suffering for us.

3.  A place of reward – Jesus knows our struggles and will reward our faithfulness.

4.  A place of responsibility – when we come to the cross through faith, we cannot hide, but we must go and do the work He has called us to do. Jesus ministered to others, we must follow suit.