The Sentinels: Guarding the Truth 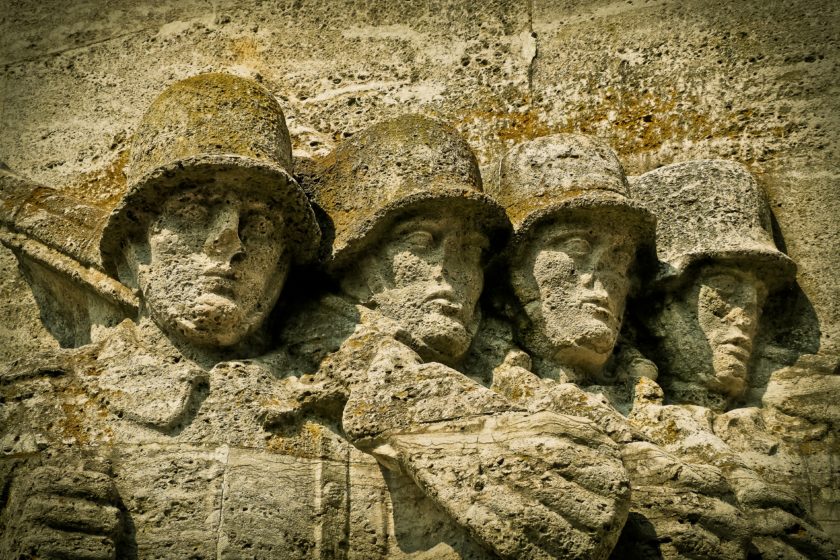 The Sentinels: Guarding the Truth

One of the most awe-inspiring moments of my life was spent standing at the Tomb of the Unknown Soldier at Arlington National Cemetery watching the Changing of the Guard.

Not everyone is qualified to stand guard. These soldiers have to not only meet certain physical standards (they have to between 5’10” and 6’4″ with proportionate weight and build), they also have to pass rigorous training before they are allowed “a walk.” Over 80% of the soldiers who try out for this duty do not make it.

These men are members of the oldest active-duty infantry unit in the US, serving our country since 1784. This unit is known as “The Old Guard,” a nickname given by General Winfield Scott during the victory parade at Mexico city in 1847. These elite men have been guarding the tomb 24 hours a day, 365 days a year, regardless of the weather since April 6, 1948.

The men always follow the same pattern:
*The Sentinel marches 21 steps across the black mat, past the final resting places of the Unknown Soldiers of WWI, WWII, Korea, and the crypt of the Unknown Soldier of the Vietnam War.
*With a crisp turn, the sentinel turns 90 degrees to face east for 21 seconds.
*The Sentinel then turns a sharp 90 degrees again to face north for 21 seconds. A crisp “shoulder-arms” movement places the rifle on the shoulder nearest the visitors to signify that the sentinel stands between the tomb and any threat.
*After a moment, the sentinel paces 21 steps north, turns and repeats the process.

The practiced cadence is timed so that the sentinel paces at a rate of 90 steps each minute.

A uniformed relief commander enters the plaza to announce the changing of the Guard. When the sentinel assigned the next walk leaves the guards’ quarters, he unlocks the bolt of his M-14 rifle to signify that he is ready to begin the ceremony. The relief commander approaches the tomb, slowly salutes, then faces the visitors and requests silence during the ceremony.

As the new sentinel approaches the relief commander, slowly and with great precision, conducts a white-glove inspection of the sentinel’s weapon, The two then march to the center of the mat where the duty sentinel stops his walk, and all three men salute the Tomb.

“Pass on your orders.” the commander instructs the active sentinel.

“Orders acknowledged.” Answers the relieving sentinel, who then steps into position at the center of the black mat. As soon as the relief commander passes, the new sentinel begins his own walk, 21 paces south, turn and pause for 21 seconds, turn and pace 21 steps south, and then repeat the actions without distraction until relieved by the next changing of the Guards. (http://www.homofheroes.com/)

These men have not varied in this since the beginning so many years ago.

My dedication to this sacred duty
Is total and wholehearted–
In the responsibility bestowed on me
Never will I falter-
And with dignity and perseverance
My standard will remain perfection.
Through the years of diligence and praise
And the discomfort of the elements
I will walk my tour in humble reverence
The best of my ability.
It is he who commands the respect I protect
His bravery that made us so proud.
Surrounded by well-meaning crowds by day,
Alone in the thoughtful peace of night,
This soldier in honored Glory rest
Under my eternal vigilance.

1 Corinthians 15:58 Therefore, my beloved brethren, be ye steadfast, unmovable, always abounding in the work of the Lord, forasmuch as ye know that your labor is not in vain in the Lord.

There are men today who are part of “a walk.” This is the same walk that their fathers walked, and they are determined not to falter in their steps. These Sentinels of Truth are following the “old paths,” determined to remain the “Watchmen” they were appointed to be.

I have seen the ridicule they are now enduring at the hands of men that once walked beside them. And it shames me.

I am thankful that I have a Pastor who sounds the trumpet of warning, a Pastor who does not cower down to the dictates of man but lives by the Word. I am thankful that he stands before us as a man that is respected for his wisdom and his steadfastness. And he remains on guard to the snares of the world, sounding the alarm with boldness when danger comes that may take us off the path.

I can qualify my concern. Those that I used to fellowship with, that have decided to embrace these new thoughts are virtually unrecognizable to me. Things that I was taught at the beginning of my walk by these same people are of seemingly no significance any longer.

And I think the biggest problem I have with the whole issue is once upon a time these men stood up and gave their word, promising to uphold a certain standard. Until the written *bylaws* were changed, they were still bound to uphold what they promised.

These “watchmen” stood in pulpits, with the souls of their saints riding in the balance of their presentation of the Word, and they were living a lie. And now that there are men who say “Nay Nay, we will not do this,” these “Watchmen” with one eye closed to their own indiscretions raise the battle cry and begin the rock slinging.

Today, I honor those men who refuse to bow down to the dictates of those that have so blatantly let down the guard. I honor them because I have seen first hand the destructive power of the world. I honor them for continuing to walk the “old paths.”

I honor them for being the Sentinels of Truth. Like the Sentinels guarding the Tomb, these men have had to prove themselves. Every step along the “walk” has been measured by the Word. And when the time comes for the “Changing of the Guards” of our faith, they will be met by young men that have been trained in the “old paths,” young men that are unafraid to stand.

“Pass on your orders,” the young man will say.

“Post and orders, remain as directed by the Word, never to stray from the path,” he will reply.

“Orders Acknowledged,” the young man of God will say, and he will step into position behind the pulpit and deliver the Truth, guarding it with his very life, dedicated to his own “sacred duty,” his standard will be perfection, his call held in “humble reverence.”

Walk on, faithful Sentinels, walk on. There is a lost world counting on you.