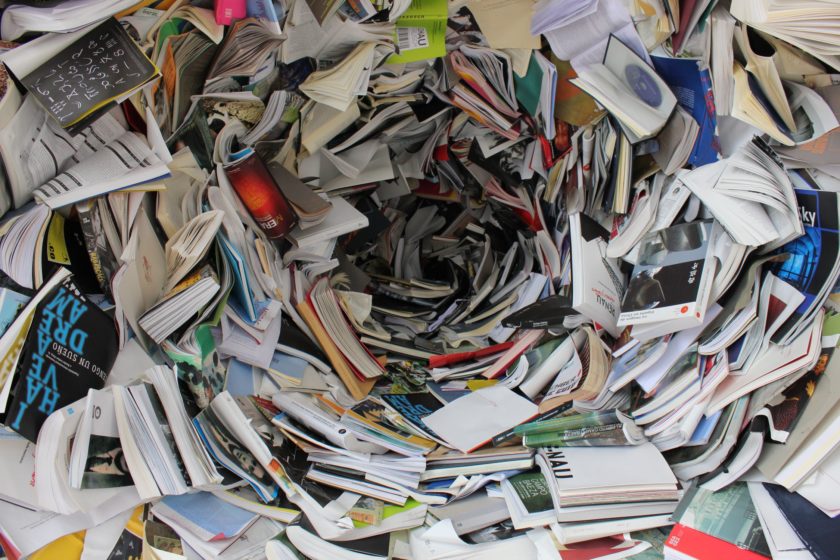 Do you have friends that are avid recyclers, garage sale junkies or maybe just pack rats?  I once read a story about a “pack rat.”  She had accumulated so much “stuff” that it took a bulldozer to move her treasures to allow the EMT to reach her dead body.  She had magazines stacked to the ceiling; I’m sure they held some great recipes, articles or coupons.  There are women and some men who actually warn other drivers with a bumper sticker; “WARNING, I stop for garage sales.”  I have to admit I’ve snagged some great bargains that my neighbors had determined were no longer necessary.

Every Sunday afternoon a parade of pickup trucks drive slowly up and down the streets of our neighborhood cruising for treasure.  Saturday is “clean out the garage and basement day” and Monday is garbage day, which makes Sunday a perfect “garbage with potential” day.  I had a friend who would yell at the “garbage pickers” as they looked through her curbside offerings.  In her eyes it was garbage and if it had any value, she would have given it to someone.  I, on the other hand, become so excited that someone can use my trash, that I run out to the curb, help them load it and offer them more.

Our great-grandparents understood the value of recycling long before it became a government mandate or politically correct.  The Christmas ham bone became flavoring for a pot of soup beans (southern term) or bean soup for you northerners.  Potato sacks morphed into shirts and dresses and finally found their resting place in a cozy quilt top.  Empty cans were kicked and barrel rings were rolled with a stick.  I can feel the earth shaking from all the “grave turning” as we nonchalantly toss out potential clothing, hours of fun for children or delicious pots of soup.  Their minds could not comprehend the piles of computers, game boys, cell phones and other outdated electronic devices.  But I’m sure given the chance; they would have turned them into the latest gadget our teenagers could not live without.

We have become such a disposable society, that we only see value at the time of purchase.  Has this mindset invaded the Christian community when we look at people?  Do we only see the value in those who appeal to us and our goals?  Do we use people, and then toss them on the garbage heap once they no longer fit into our plan?  Perhaps there are even those in which we see no value; the halt, the lame, mentally-challenged, dirty, poor, fat, and ugly or the unborn.  Have we forgotten that Jesus came to seek and save those we consider potential garbage?  Jeremiah tells the story of turning potential garbage into the garbage with potential.  Jeremiah 18:44, “And the vessel that he made of clay was marred in the hand of the potter: so he made it again another vessel, as seemed good to the potter to make it.”  The vessel that had become landfill in society’s eyes was changed into a vessel of value in the hands of the Master Recycler.

A song says, “He looked not at what I was, but at what I could become.” Left to our own desires and short-sightedness, we would have all eventually been left on the “curb of life” mere fodder for the trash pickers.  I am so thankful that Jesus looks on the potential garbage of life and sees garbage with potential.   Dear God, today, let me see everyone through your eyes, reach with your arms and love with your heart.

Suicide and the Chosen