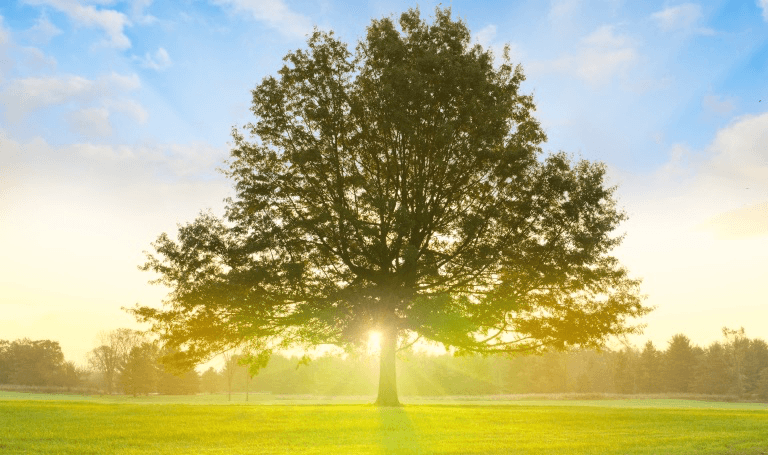 But ye shall receive power, after that the Holy Ghost is come upon you: and ye shall be witnesses unto me both in Jerusalem, and in all Judaea, and in Samaria, and unto the uttermost part of the earth. (Acts 1:8)

Recently I was blessed to be up North and had the opportunity to run the trails in the wood’s of Kalkaska, Michigan. I have a few set courses that I run and there is one course that I call the Kalkaska Figure Eight. Well as I came upon the intersecting part of the trails, I looked up and saw this very prominent sign next to a large tree. The area around the tree had been obviously cleared for this ‘special’ sign. As I approached the sign I noticed that the heading made this statement, “The Witness Tree”. Below this heading was a paragraph describing what they meant by this heading. Apparently, on September 26, 1850 a large sugar maple tree was planted as a witness and a testimony to future generations. It stood for a past that had long ago disappeared from the face of the earth. They had a ceremony commemorating the event and I thought about those who had gathered around to mark the occasion. What must have gone through their mind? They knew that the tree had the potential to live way beyond their years and they would die long before the ‘witness’ may ever become a witness. Yet now, in the middle of this vast acreage of woods, here stood out a huge sign commemorating this ‘Witness Tree’. It had survived 158 years after the ceremony. It’s planters were long gone, but it was still here proclaiming that they had once existed. That there was a people who looked to the future and though they would not be there they wanted the future to be able to take a moment and acknowledge the past. To remember them, their toil, and their labor.

Immediately I thought about God. I thought about the past and I thought about the future. What kind of a ‘Witness Tree’ am I? What does the future hold? I thought of the many times when people who once were in church, whether it be student or adult, and they would come back to church. I am not sure what excites me more; the fact that they have returned or whether I am still here. That I am still a ‘witness tree’ standing in the midst of a crazy world commemorating a planting that took place over twenty-one years ago. As that tree endured 158 years of seasons, so I have endured a few years of changing seasons. Although the number of seasons are not as high in number, as a human ‘witness tree’, whose year’s of life are not as long as that tree, yet I have remained planted. Who knows what that tree may have endured over the years. Fires, droughts, competition for the light of the sun, pollution, and human encroachment. If one could open up the trunk of that tree and look at the seasonal ring lines, it would be possible to ‘see’ what that tree had to endure over the last 150 years. The amazing thing is I had run that road countless times over the past four or five years and I never knew that there was anything different about that tree. It was crowded out by other trees. It was nothing but a tree standing in the midst of the forest. Funny that I couldn’t see the tree for the forest, isn’t it! Yet, there it was, 158 years later standing as a ‘Witness Tree’. Grown up from a sapling to a full grown adult tree proclaiming victory over the natural course of this world.

In the instant I saw this tree my mind raced both to the past and to the future. From the natural to the spiritual. Life is but a vapor and how quickly it passes by. There in a moment I saw the Lord Jesus Christ. And unto the angel of the church of the Laodiceans write; These things saith the Amen, the faithful and true witness, the beginning of the creation of God; (Rev 3:14) The TRUTH still stands and has withstood the test of time. Seasons come and seasons go, yet God’s word stands true. Though carnality tries to drown the truth out. Though the world seemingly makes the truth look insignificant IT STILL STANDS as a witness against it. Heaven and earth shall pass away: but my words shall not pass away. (Mark 13:31) In the midst of a carnal Roman Empire God birthed a Witness Tree of victory. The ceremony was the day of Pentecost which declares that all who are willing can be a testimony of victory over the past and into the future. Trees of RIGHTEOUSNESS in the midst turmoil and death.

There is something about the past that emboldens me! Although I cannot go back I don’t have to repeat it. There are many in this life who have horrible pasts. Seasons of dismay, hurt, abuse, and pain. Yet to some the pain becomes something they live in, dwell in, and cast a bleak vision of their future in. But there are those who use their past to become springboards of a future witness of victory. It has been said that there are trees who only after the drought become stronger and there are trees who become more susceptible to disease because of the drought. There are trees that need fire, because it is the natural lightening strikes of fire that activate the cone of a pine tree to open up and release the seeds of the future. Oh Lord, help me to endure the fire that my life may release the seeds of victory and eternal life to my family and those around me!

It was the faithful and true witness of Jesus Christ that spawned saplings of victory in the Truth. Paul ran to the guillotine, Peter was crucified upside down, and the rest of the Apostles faced an similar fate! Leaving us a past as a witness to this Truth. Signs pointing to a clear evidence that the Truth existed before us, it still stands today, and it will still be here long after we are gone. Help me Lord Jesus to be that Witness Tree! To stand boldly in the midst of opposing forces proudly proclaiming my heritage and boldly standing as a witness in the present. Enduring the seasonal temptations of the flesh and lifting my hands up high toward the Sun of Righteousness, in faith, that the future will bring all that the Truth is empowered to give us!

In 1987 the Lord God Almighty pulled me out of a horrible pit and I have been running for the Lord ever since. I am a husband of a beautiful Apostolic wife and the father of two beautiful girls. I enjoy history (mostly American History), working with youth, writing, and I am also an avid runner. Along with completing the Boston Marathon in 2005, as of this year, I have finished a total seven marathons.